Today, my husband and I celebrate the 17th anniversary of our wedding. As my sister-in-law was taking me to get my hair done on that bright spring morning, she gave me the single best piece of advice: “At a couple points,” she said, “just STOP. Take a look around. Take it all in.” I’m so very, very grateful that she offered me this wisdom, because thanks to her, I have several clear memories of that gorgeous day, when I so easily could have lost them in the shuffle and momentum of the celebration.

Of the Scriptures that were read, this one stands out for me:

“Everyone who listens to these words of mine and acts on them will be like a wise man who built his house on rock. The rain fell, the floods came, and the winds blew and buffeted the house. But it did not collapse; it had been set solidly on rock.”  (Matthew 7:24-25)

I’m not even going to begin to claim that we’ve done everything right in our 17 years of marriage. And anyone who has been married for any length of time will tell you that rain will fall, floods will come, and winds will blow. Your commitment to one another will be tested, perhaps not to the breaking point, but there will certainly be challenges.

My sister-in-law’s wisdom is still the one and only thing I tell brides-to-be, and I think it applies well to the rest of life too. And I’m sure you’ve heard it before, too – because we all know that life goes by so, so darn quickly. You don’t want to let precious moments with your loved ones or friends slip by unnoticed. But I would argue that stopping to take a look around is also critical for the long-term success of a marriage.

When my husband looked into my eyes and pledged to be with me until “death do us part,” I could see in his green eyes that he meant every word. We both meant what we said, and still do.

It’s easy to stop at the good moments – to appreciate sweetness…The feel of my hand in my husband’s. The way he always kisses me goodbye before leaving the house – for any reason, big or small. The fact that he is exceptionally good at picking out gifts for me, and at whipping up the most delicious meals. At these times, it’s also easy to remember to thank God for this good man.

But then of course, storms do occasionally blow through. What I’ve learned is, they don’t have to tear us down – because in the midst of them, we can keep building the foundation of our house – brick by brick. It’s grace that taught me this – worked on me, really.

As often as possible, we STOP in the moment and take a look around. We look into one another’s eyes. We examine what’s really going on in the here and now – take an unflinching look so that patterns we know didn’t work for us in the past can’t repeat themselves. We speak honestly and openly about the present, and if there’s something that needs work – we work on it. Nothing gets swept under the rug. And the words we use with one another are words of affirmation – they support, encourage, reaffirm our connection and commitment to one another. They build up the foundation of our marriage – the foundation of “us.”

A house isn’t built overnight, but when the foundation is re-fortified, it can stand for a long, long time. May ours be built stronger, again and again. This is my prayer for us, on this 17th anniversary of ours.

The couple was passing me on the sidewalk as I was heading into the shopping center and they were walking out. He was slightly ahead of her and all of us were instinctively hunched over, bracing ourselves against the 14 degree temperature and sub-zero wind chill. He looked back at her and gruffly said:

Then he turned and headed off into the parking lot, leaving her there, moving along slowly with a downcast face.

I immediately thought of my husband. I’m not going to say we’re perfect people and have never had a rough patch in our marriage, and unfortunately on this Friday afternoon, I also don’t have time to paint a full picture for you and list all of his best qualities.  But I just HAD to write this.

And when it comes to cars and parking lots – there’s the truth about him in a nutshell.  If the weather was bad or the situation iffy, he’d tell me to stay where I’d be warm, or dry, or cool, or safe, etc. and he’d go get the car and bring it around to me.  I admit, there might have been times when this was better for him (he’s a faster walker than me, and if the road is icy you don’t want to walk with me!), but whatever the case, he’s always considering my best interests, and if the kids are with us, theirs as well. 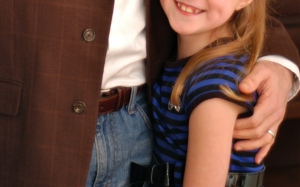 Last weekend when I woke up on Valentine’s Day, the first thing I saw were gorgeous red roses from my husband. And down the hall, my daughter saw pink tulips, from that same good man. Tonight, he will take our daughter to the annual Father-Daughter Dance at her school. It’s the fourth time they’ve been, and my little girl looks forward to it every year. This ritual is close to her heart and I know why.  It’s a night where she has the undivided attention of her first love, her dad. I love this night, too, because I know that day by day her interactions with her dad form her expectations about how she is to be treated by a man somewhere down the road. Tonight she gets to practice being the apple of someone’s eye. And my sweet girl is blessed, just like me.

A friend of mine told me that her parish priest once asked this question in a homily:

“If you were accused of being a Christian, would there be enough evidence to convict you?”

Great question.  Ever since I heard it, I keep revisiting it, because really, if I’m a Christian, does my life demonstrate my love for Christ?

I thought about this question today when I opened up my wallet – not to give away money, though maybe I should be doing more of that.  No, I thought about it because the light bounced off my little stainless steel cross, and the minute I saw it I thought about my dad.

My dad is an intelligent man. An engineer and former military officer.  A man of principle.  A man of faith.  He can certainly explain his belief in Scripture, but for me, his quiet, reverent heart has always spoken most clearly to me about The Lord.  And if he were accused of being a Christian, his life would turn up lots of convicting material, but hidden on his person would also be one thing in particular…

When I picture my dad stepping up to pay for something at a cash register, I see his gentle hands cupping three things: coins, a silver pocket knife, and a stainless steel cross.

That cross.  It has always been there.  It serves as an outward sign of the personal relationship he’s been ready to share – freely, as it was given to him.  Over the years, he’s witnessed silently to countless clerks who saw that cross, one at a time, as he opened his hand to pay for groceries, meals, hardware, craft supplies, gifts, newspapers, sodas, and more.  It’s evidence of a Christian that just keeps turning up, and for my dad – a reminder to himself that his God is Emmanuel – always with him.

It was Christmas time, 1985.  My sister and I were visiting our dad, who was living alone in Washington, DC.  At that point in his life, my dad was driving a VW camper – the perfect vehicle for our excursions to Shenandoah National Park in Virginia. But this night, we had brought it to the Mall, stopping here and there to see decorations and our nation’s monuments all lit up.

Somewhere downtown, we were sitting in a parking spot, warming up slowly, snug in our vehicle shelter, when a man rapped on my dad’s window, then respectfully took about three steps back.

My dad rolled down the window just a little and said,

That was when I looked at him – standing with his hands folded together at his chest, his dirty clothes hanging off his slim frame, his chiseled face gray and weary.  I don’t know how old he was, but he seemed older than my dad – not in chronological age, exactly, but in demeanor.  He was weathered.  Tired.

“What food do we have back there in the cabinet?”

I looked and found a few cans – of beans, corn, whatever… and passed them up to my dad, who rolled down his window and handed them out to the man.

My dad cocked his head to the side and asked,

“Do you have any way to open those?”

“Wait a minute.  Gretchen – there’s a can opener in the drawer.”

Sure enough, there was. It went to the front and out the window.

The man was turning to leave when my dad asked one more question – the one that became emblazoned on my soul.  It impressed upon me for all time the difference between this man’s life….and mine.

“Do you have any way to stay warm?”

The man looked down, resigned, and shrugged his shoulders in such a way that let us know. His answer was No. Not really. I make do.

“Gretchen – Give me that sleeping bag.”

I reached back behind the bench seat I was sitting on, heat from underneath it blowing out on the back of my legs, and found the navy blue sleeping bag.  It too went up to the front and out the window.

He was so grateful – the kind of grateful I so rarely, rarely see.  And he murmured many more thank-yous as he moved away for the last time.  I watched him walk away into the shadows, his arms overflowing with his newfound bounty.

My dad rolled up his window and we drove home.  All I could see was the back of his head, but if I hazard a guess, I’d say his blue eyes were shining – with love.

Dad – You were light in the darkness, Christ’s hands in the world.  Thank you for showing me how it’s done – humbly, freely, with a heart overflowing with God’s grace.

And the King will say to them in reply, ‘Amen, I say to you, whatever you did for one of these least brothers of mine, you did for me.’ 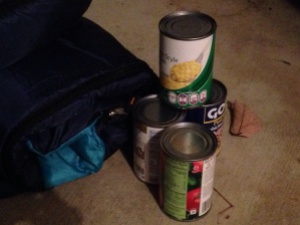 Read With Me – Current Book Selection

Welcome to my site! See the About Me & My Writing tab to read a bit of my story.

Become a Dewfall Subscriber too!  Put your info in the boxes below and I’ll email you a note the next time I publish. You’ll also receive my weekly newsletter – Friday Fireflies – featuring links, photos, and book suggestions to help you see grace hidden in plain sight.

Thanks so much for stopping by!